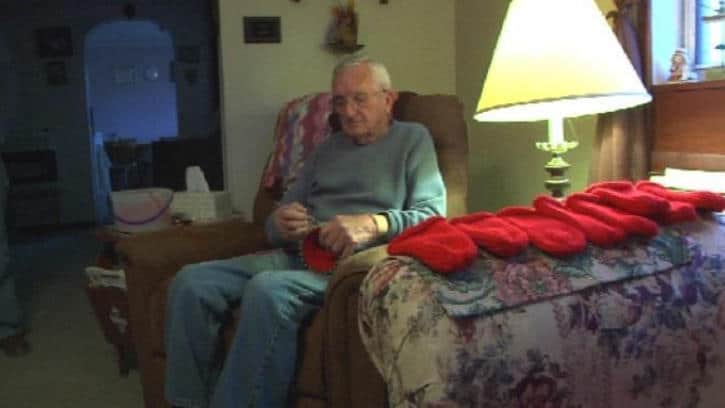 And all across America volunteers have knitted more than 100,000 red hats that are given to newborn babies at hundreds of hospitals.

In southwest Missouri, more than 2,000 hats have been distributed to hospitals in six communities.

And a man from Richland, Mo. is certainly doing his part to help out.

Clemont Sheeley worked in a shoe factory in his 20’s. And now, 60 years-later, he’s a one man hat factory for the Little Hats, Big Hearts campaign put on by the American Heart Association.

“He literally supplied enough hats for one of the hospitals here in Springfield for the month of February so that says a lot,” adds Peggy Scott with the American Heart Association of Springfield.

A heart patient himself, Sheeley is an avid fisherman and self-sufficient person who still climbs into the trees outside his home with a chainsaw to cut wood.

“In the winter time I try to do something,” Clemont adds. “I don’t like to sit here and look at these walls.”

He’d taken up latch-hook rug making years ago, but balked when his daughter brought up knitting.

“I knit with knitting needles,” Pam said. “I always told him I was going to teach him how to knit. And he said, ‘I’m not ever going to knit. You’re never going to get me to knit’.”

“I was apprehensive at first,” Clemont admitted. “But I thought shoot, I’ll try it. Well, I didn’t stop. I’m still a-going.”

To be fair, it is loom-knitting, which is a bit different. And now he’s enlisted his son-in-law Joe Sewell from Nixa, as the two not only make hats for newborns, but also for adults and youngsters at schools. For free of course.

“It just gives me a thrill,” Joe said. “I’m thinking, I wonder what baby goes on. Is it a boy or a girl? Hoping they’re healthy.”

Unfortunately Sheely’s health has been affected by the project as he’s developed arthritis.

“Of a morning these hands are all swollen,” Clemont said. “Never did have it until I started making the hats. But I’m gonna keep working. I ain’t gonna stop.”

And it’s certainly safer than climbing into trees with a chainsaw at the age of 87.

“I just think he reminds me of people I knew when I was growing up in a small town,” Scott said. “I hope that when I’m 87 I’ll be able to do the things that he is doing for his community.”